UC San Diego, which previously held classes in rented space, has announced a $42 million, 66,000-square-foot downtown outpost. Construction is expected to begin next year with completion by late 2020 or early-2021. (Carrier Johnson + Culture)

Developed by Holland Partner Group , the Park & Market project will include 426 apartments, a 53,000-square-foot office and classroom building for UCSD, renovated historic house likely converted to restaurant use and an outdoor amphitheater. Completion is set for 2021. 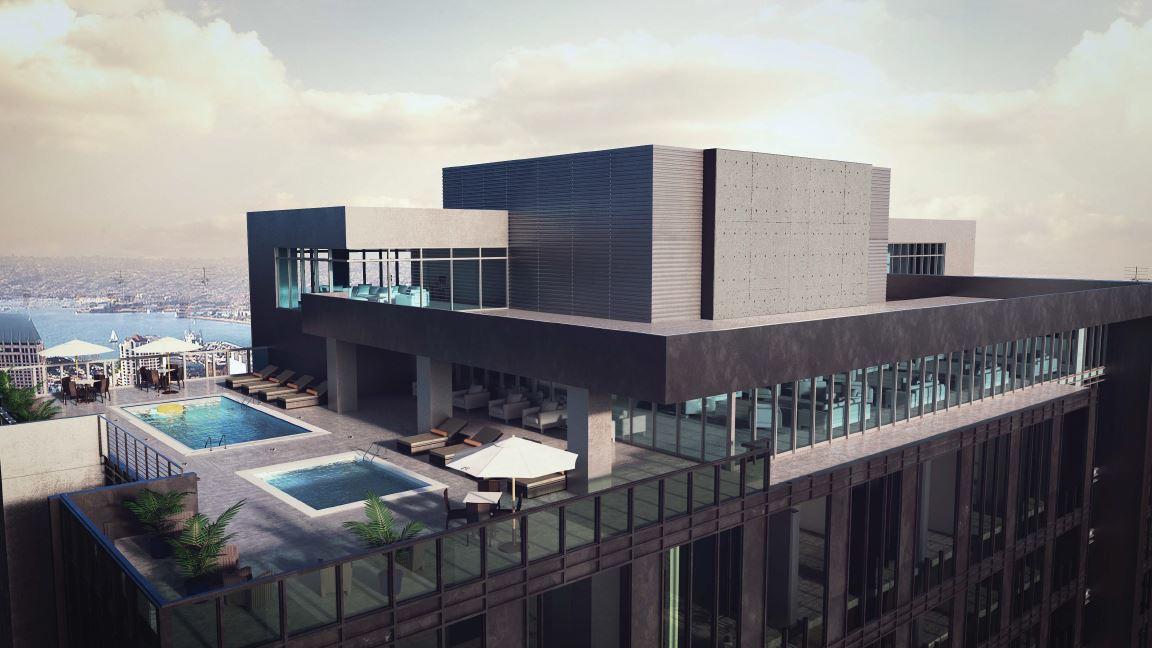 “This project is going to be a flagship project,” said Mayor Kevin Faulconer, by drawing college talent to the heart of the city. “This is a win-win for our great city.”

He welcomed the additional housing at all income levels and the arrival of UCSD programs and activities at a permanent downtown location.

“What a better place for UCSD to spread its wings than right here in the heart of downtown, which is one of the most creative places in the United States for entrepreneurs and innovators.”

UCSD Chancellor Pradeep Khosla said the four-story office-classroom building will not only serve campus students and faculty but also be used to reach out to neighborhoods and help prepare students for college. As an example, the university is tutoring incoming students at area libraries this summer prior to enrollment.

“We want to be the best possible server of underserved communities in this great city,” Khosla said.

He also noted that the San Diego Trolley, which passes by the Park and Market site, will extend to the campus by the time the project is completed, bringing Torrey Pines Mesa within 20 minutes of the city’s central business district.

Mary Walshok, the associate vice chancellor who led the drive to open an outpost downtown, said the second floor of the building will be set aside as a “talent accelerator” where startup entrepreneurs can get advanced training and advice on how to grow their companies.

“When they grow their companies, they create jobs,” she said.

In addition, she said, the as-yet unnamed downtown university hub will include art galleries, performances and a place where tourists can stop by for “groovy food and wine and music festivals.”

Holland will pay the city $12.3 million for the site, with the money set aside for affordable housing projects. UCSD will pay the developers $36.2 million in nonstate funds for its new building. The site is bounded by Park Boulevard, 11th Avenue and G and Market streets.

Of the total, 85 will be set aside as affordable units to households earning less than half the regional average income and potentially occupied by low-earning graduate students.

The 33rd floor will include a pool, spa and other amenities.

The historic two-story Remmen house, built in 1907 with four units for the first owner, mining entrepreneur Ole Christian Remmen, is being moved off the block to construct underground parking levels with 516 parking spaces. It will be returned to the northeast corner and restored for possible use as a restaurant. Historic consultant David Marshall described it as a Craftsman style building with eclectic neoclassical ornamentation. The city bought the property in 2003.

A 3,200-square-foot amphitheater and other public spaces will be programmed with various events, the developers said, and modeled on the Quartyard temporary park that occupied the block prior to construction and offered numerous entertainment and educational events. The Quartyard developers are reopening a replacement space nearby this fall.

“People are dying to live here,” said Thomas Warren, chief operating officer for Southern California. “They love the environment, the walkability, the restaurants and commuting north to the jobs in La Jolla and UTC. I think this is going to change that and really bring the jobs back (downtown).”

Warren said in an interview that four years ago, when the property became available, East Village office rents were too low to justify new multitenant construction.

Now with prime space going for more than $4.50 per square foot per month and vacancies below 10 percent for the best spaces, office construction now makes sense.

He said his company plans to bid on the three-block redevelopment opportunity at the old county courthouse complex on Broadway.